Burning Questions: Is Ottawa finally about to get serious about housing bubbles?

Kevin Carmichael: One thing is clear, the political pressure to avoid measures making it harder to buy a house is immense 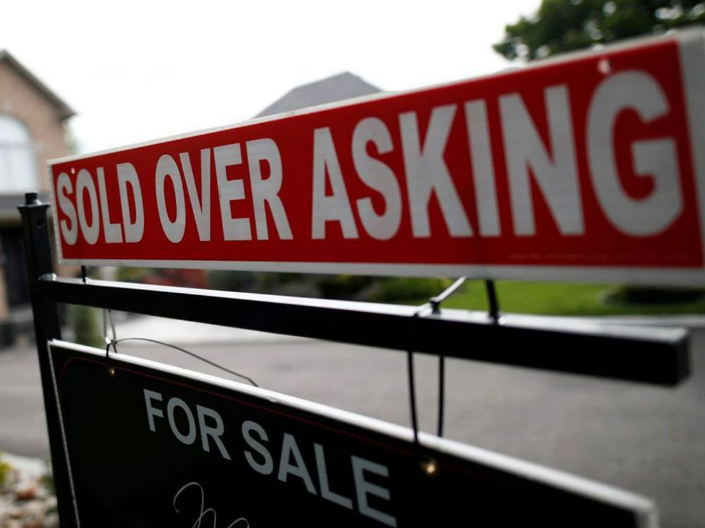 The release of the Bank of Canada's new five-year mandate last week was followed a few days later by news that the average price of an existing home had surged to $720,850. Photo by Postmedia
The Financial Post takes a look at some of the biggest issues Canadians have about business and investing in 2022 in our latest Burning Questions series.
The Ottawa policy establishment did something significant in the Bank of Canada’s new mandate. It acknowledged the lower-for-longer approach to interest rates that central banks have followed for the past decade is now official policy: low forever, or at least the foreseeable future, is the new mantra.
That’s a big deal. If low borrowing costs are the norm, financial instability will become a constant threat without better policy.

The federal government and the central bank conceded as much in the mandate, promising to ensure the way Canada goes about financial regulation is “fit-for-purpose.” However, they avoided specifics about exactly how they will go about deflating the asset-price bubbles that are the inevitable side effect of low interest rates.
The release of the Bank of Canada’s new five-year mandate last week was followed a few days later by news that the average price of an existing home had surged to $720,850, yet another record and a reminder of what the International Monetary Fund and others have been saying for years: Canada’s system of “macroprudential” regulation isn’t up to the job of preventing crises.

“I think it’s been working quite well, but I think it’s a good idea to assess,” Tiff Macklem, the Bank of Canada governor, said in a year-end interview when asked if the regulatory system was fit-for-purpose today. “This agreement recognizes that in a low-for-long world, the economy is prone to financial imbalances. This isn’t just a temporary phenomenon that is going to go away.”
Judgment calls

The intense focus on language concerning the pursuit of full employment in the new mandate was understandable. The consumer price index increased 4.7 per cent in October from a year earlier, feeding anxiety the central bank was already losing its grip on inflation. Any additional obligations might only make it harder for central bankers to focus on keeping inflation low.

Previous agreements between the government and the Bank of Canada were succinct documents saying little more than monetary policy should endeavour to keep the consumer price index advancing at a year-over-year pace of about two per cent. The pact Finance Minister Chrystia Freeland and Macklem released on Dec. 13 had a lot more going on.
Achieving “low, stable inflation” will remain the central bank’s “primary” objective, but there’s also talk of supporting “maximum sustainable employment,” even though the document admits such a thing “is not directly measurable and is determined largely by non-monetary factors that can change through time.”

There was a time not so long ago when the economics profession took seriously the notion that interest rates should be guided by a simple formula, or even tied to various commodities. The Bank of Canada’s new marching orders are a long way from that. The judgment calls of Macklem and his advisers will ultimately dictate policy, not simply mathematics.
Freeland and Macklem insisted the wordier marching orders are simply a transparent expression of how the central bank has been going about its work for much of the past decade. Some observers were skeptical, and not just the usual partisan and ideologically motivated critics who troll the Bank of Canada on a weekly basis.
Christopher Ragan, founding director of McGill University’s Max Bell School of Public Policy and a former adviser at the central bank, said in an essay published this week by that Hub that perhaps Freeland and Macklem actually disagree about how the central bank should conduct policy, rather than they united front they presented to the public.

“Maybe that is why the joint statement is so much longer than previous ones, with those various other topics mentioned,” he said. “Maybe their inclusion was insisted upon by the minister as an explicit ‘shot across the bow’ of the bank, a warning that if it does not change its ways then the government may be prepared to interfere.”

Stephen Poloz, the previous governor, said in 2014 that too many people had come to see the central bank’s inflation target as a ceiling, not the midpoint of a comfort zone that ranged from one per cent to three per cent. He tended to err on the side of growth, leaving interest rates low even as the jobless rate dropped below six per cent, a mark that had come to be associated with economic growth that was “just right.” An unemployment rate lower than that was thought to be a harbinger of runaway prices.


The unemployment rate would fall to 5.4 per cent, and was still comfortably below six per cent when the COVID-19 pandemic changed everything in March 2020. Some economists insisted Poloz was playing with fire, yet inflation remained tame. A narrow reading of his mandate might have resulted in higher interest rates. But Poloz took advantage of the flexibility he had to take a calculated risk. As a result, he expanded the definition of what was possible, at least under the right conditions.
“The bank learned something from that,” Macklem said in the interview, which took place at the central bank’s headquarters in Ottawa on Dec. 15.

Both Poloz and Macklem contributed to the research that persuaded Brian Mulroney’s government to sign off on an inflation target three decades ago. Both were hot-shot economists from Western University in London, Ont., who earned their PhDs amid the double-digit inflation of the late 1970s and early 1980s. That period informed the early emphasis on suppressing the cost of goods and services.
But as the threat of chronic inflation faded, the central bank concentrated on maintaining a narrow “output gap,” the difference between actual gross domestic product and the Bank of Canada’s estimate of the Canadian economy’s non-inflationary speed limit.

“Inflation targeting has never been a mechanical exercise,” Macklem said. “It’s never been uniquely focused on inflation. Employment, the output gap have always been an important part of the framework. That new mandate articulates that clearly. It ratifies what we have been doing.”
Great Recession changed the game

If the Bank of Canada’s new five-year mandate is messier, it’s because the world is messier than it was a couple of decades ago, when central bankers boasted of having engineered the Great Moderation and political scientists talked seriously about the end of history.
Central bankers believed in “divine coincidence,” the statistically sound, yet somewhat mysterious correlation between low inflation and low unemployment. The political class came to accept that central bankers should be left alone, like judges, to do what they needed to do without interference. Central bankers protected themselves against interference by minding their words and sticking to their mandates.
The Great Recession changed the game. It showed that by placing a spotlight on inflation, policy-makers had put other important variables in play, including much of what goes on in financial markets. The political response to the financial crisis of 2008 and 2009 was weak, forcing central banks to take an outsized role, which, in turn, exposed them to political pressures that haven’t receded.
Many of the rules of thumb on which inflation targeting is based no longer hold, while new research suggests variables such as inequality play an important role in economic stability, and, therefore, the policies needed to achieve that cherished equilibrium between inflation and growth. As for climate change, every major economy has signalled it intends to take an all-hands-on-deck approach to what most consider an existential threat.

Given all of that, it’s unrealistic to think the Bank of Canada would be left alone to watch the consumer price index. There are a lot of topics in the mandate because central banks are central players in a lot of unsettled discussions. It’s better to be honest about it, than to pretend otherwise.
“It is important that the objectives of monetary policy have political legitimacy, that they do reflect the will of the people as reflected in their elected governments,” Macklem said. “It’s precisely by agreeing on a clear mandate that it makes it easier for the Bank of Canada to preserve its independence and pursue its objectives.”
Financial imbalances

Rather than the promise to probe full employment, the commitment in the new mandate warranting more discussion is this one: “The government and the bank acknowledge that a low interest rate environment can be more prone to financial imbalances. In this context, the government will continue to work with all relevant federal agencies to ensure that Canadian arrangements for financial regulation and supervision are fit-for-purpose and consider changes if and where appropriate.”
Macklem’s margin of error here is small. The Bank of Canada’s benchmark interest rate was 2.75 per cent when the consumer price index last tested five per cent in early 2003. It raised interest rates a half point to cool growth. A few months later, when it realized it was ahead of itself, the central bank cut interest rates back to 2.75 per cent.

The target rate is currently 0.25 per cent, and was only 1.75 per cent at the start of the pandemic. Economic and financial conditions have changed so much over the past couple of decades that the ceiling for borrowing costs will likely remain uncomfortably close to zero.
That means the central bank’s controversial bond-buying program will almost certainly return when the economy next falls into recession, because cutting the benchmark interest rate from an already low level won’t provide enough stimulus to turn the economy around. As a result, the housing market will remain dangerously frothy unless policy-makers offset the effects of ultra-low borrowing costs.
The United Kingdom responded to the financial crisis that caused the Great Recession by putting the Bank of England in charge of financial regulation. The work of both its monetary policy and financial stability committees is highly transparent.

By contrast, the Bank of Canada supplies the research on financial conditions, but the power to act lies elsewhere. The various federal agencies that have a stake in the financial system meet regularly, but always far from public view. Ultimately, it’s the finance minister who is responsible for the toughest calls, which is far from best practice.
What prompts the government to act is shrouded in mystery, but one thing is obvious to everyone: the political pressure to avoid measures making it harder to buy a house is immense. Asked if Canada’s approach to financial regulation is “fit-for-purpose,” Macklem avoided a direct answer.

“The paragraph is in the agreement for a reason,” he said. “I certainly welcome the opportunity to work with the Department of Finance and make sure the system we have is fit-for-purpose.”

McGill University’s Ragan worries Freeland sent a shot across the bow of the Bank of Canada. Maybe it was the other way around.